Purchase intentions during corona: 10 statistics to help you set up campaigns

The corona pandemic has major medical, social and economic impact, and it changed the purchasing behavior of tech enthusiasts, according to our data. As we map the behavior of our community, we have access to interesting information about, for example, the changed times at which website visitors are active, what their purchase intentions are and what shifts in product categories are occurring.

We list the 10 most striking trends from the data over the past year, and explain how you can use them in your campaigns. Click below on the trend you want to read more about.

The times at which visitors are active on Tweakers every day reflect the effect of working from home. Website visits in 2020 started later in the morning, there was more traffic during working hours and visitor traffic dropped slightly around lunch time and in the afternoon. This is probably because homeworkers are more productive in the afternoons than they were in the pre-lockdown period when they worked in the office, or they might have children asking for attention in the afternoon. Also striking: we had more visitors in the evenings than before the first lockdown. This is undoubtedly partly due to the fact that people had to enjoy themselves more at home.

Given the shift in visiting times, it could be interesting to start campaigns with "time targeting" in which expressions are visible at peak times - for example between 9 and 12 in the morning. This way you can be sure that your campaign receives optimal attention at times when as many visitors as possible are present on the website. 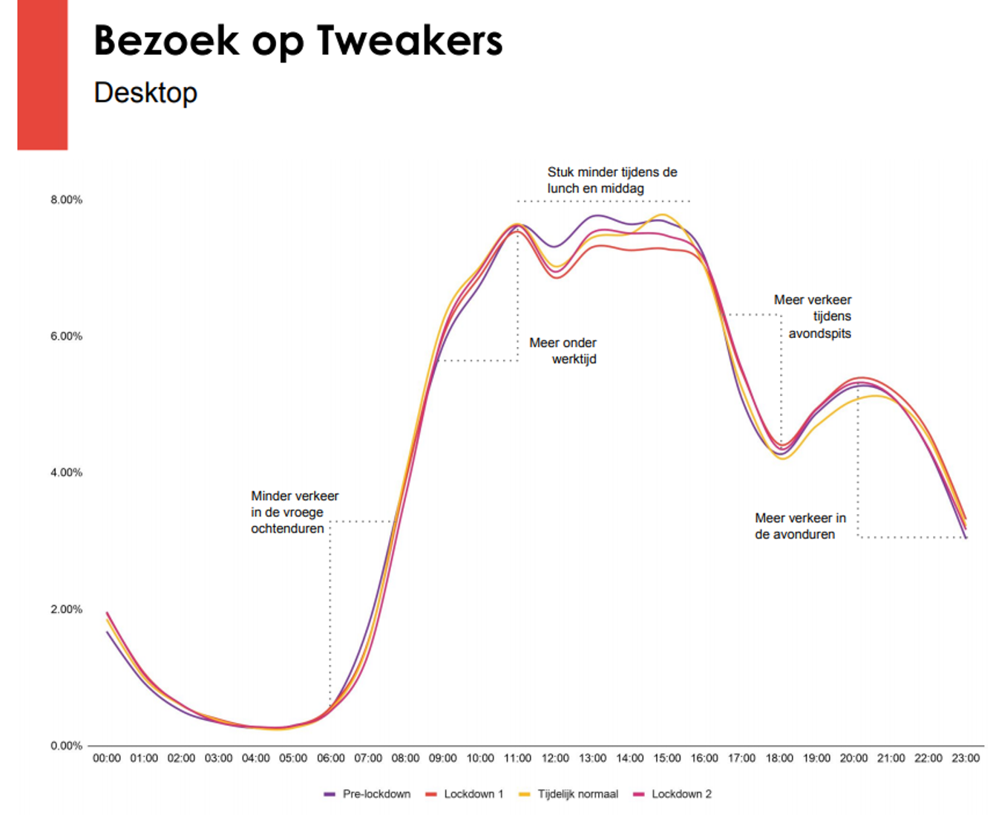 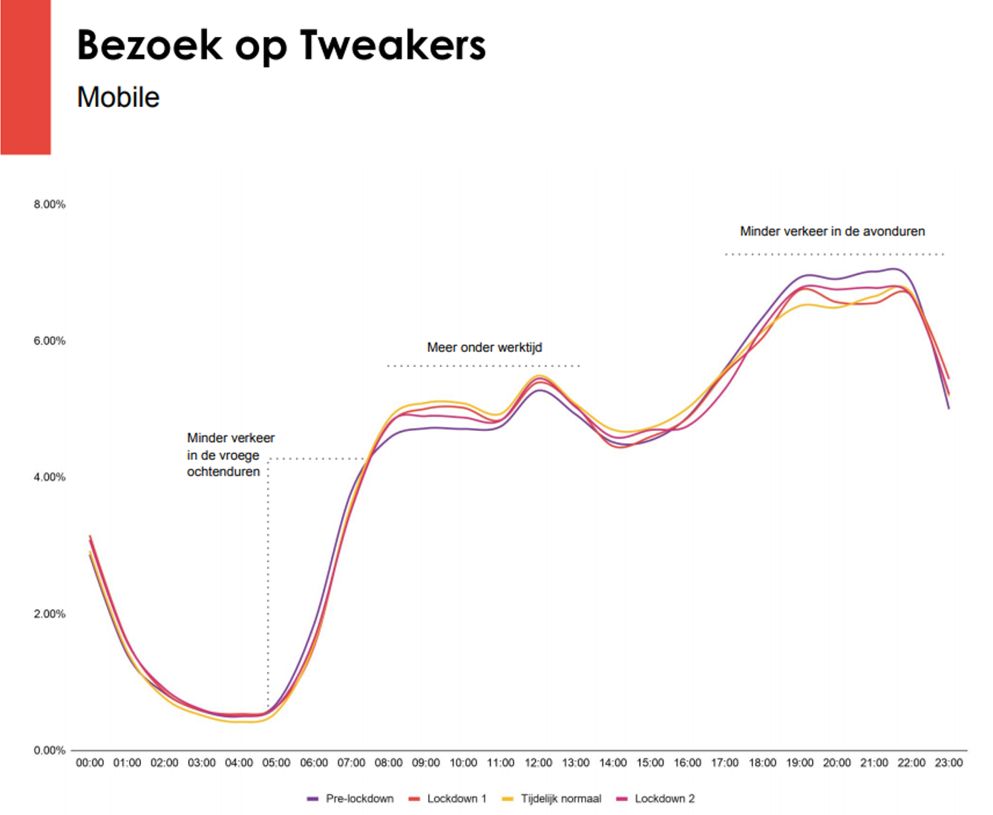 Timed targeting within your campaign not only reaches more "regular site visitors", but also more potential buyers of products. This is shown by the fact that besides visiting times the time at which visitors make purchases shifted as well. We think we can explain the latter: whereas in a 'real' office environment it is undesirable to buy a new gadget or tech product online during working hours, homeworkers are less bothered by this.

The data from the Tweakers Pricewatch clearly show that in corona time there is more online shopping during working hours - and especially between 8 a.m. and 12 noon - and less in the evenings. 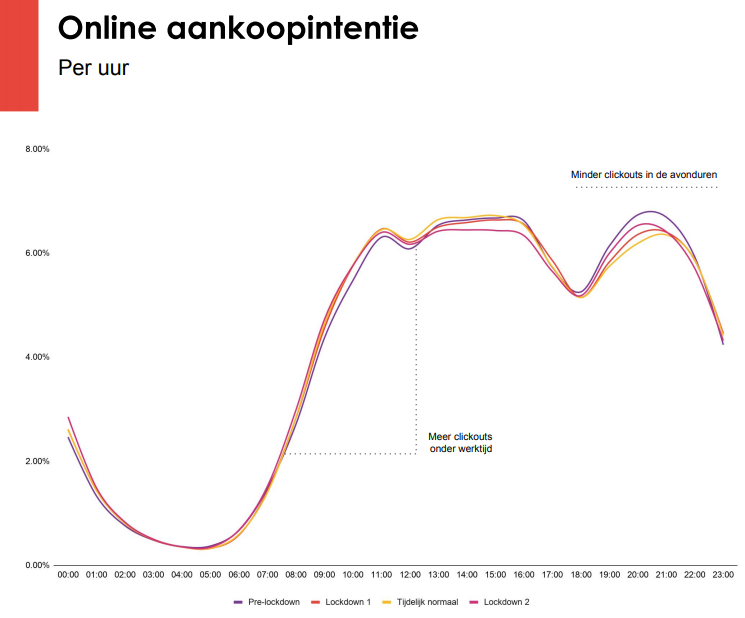 "Corona year" 2020 was characterized by an enormous boost in online purchasing behavior. The Pricewatch recorded a record number of clickouts. The distribution throughout the year shows that this is at least partly an effect of the corona pandemic: in January the visitor numbers were roughly in line with those of 2019, but from March, when the first lockdown started, they skyrocketed. In the summer months, when the corona measures were relaxed, growth slowed somewhat, only to peak again during the second lockdown - with the holidays in sight.

The year 2020 was characterized by shopping spree, and the Black Friday week also recorded even better figures than in 2019. This emphasizes that especially now suppliers should have their product marketing and advertising in order to take full advantage of the increased buying intentions within our community. Our advice: make sure that your product feeds are updated, check whether all listings on the Pricewatch are correct, take a critical look at the competitiveness of your pricing and do everything you can to optimize your online visibility. In this way you can optimally benefit from the current boost in purchasing intentions. 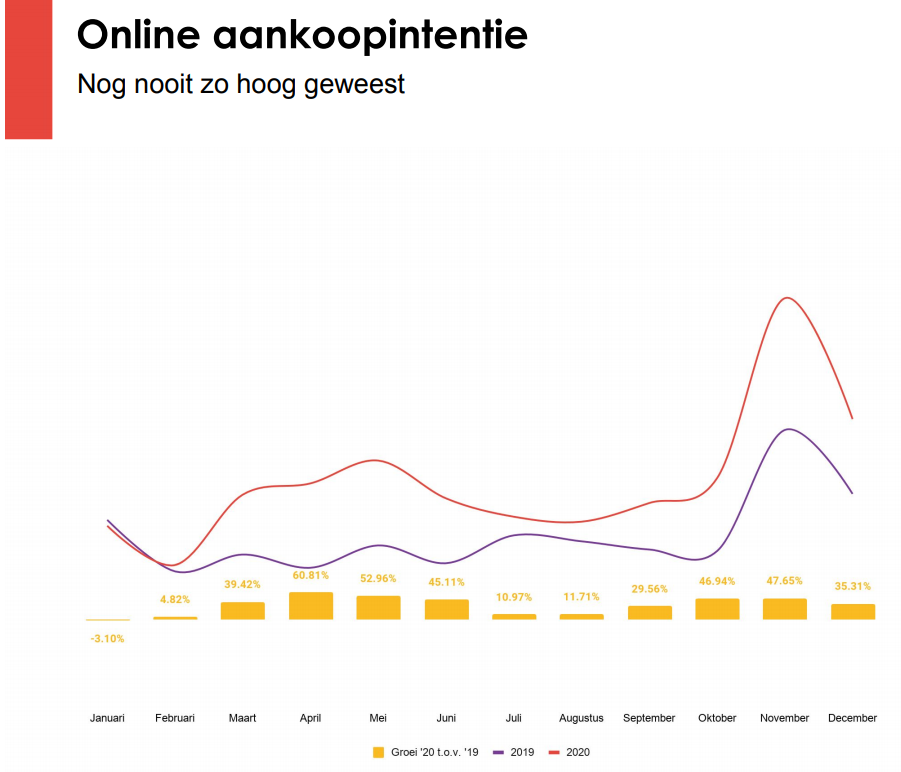 In order to respond optimally to market demand, it is wise to pay extra marketing attention to specific products that can count on a lot of interest. This mainly concerns (tech) products for the design of a home workplace. For a large part of 2020, many Dutch and Belgians worked from home, which is reflected in the times at which Tweakers was visited, and in the product categories that were popular in the Pricewatch. Especially in March, during the first lockdown, a huge peak in the purchase interest for monitors, keyboards, webcams and mice, among other things, is visible, with a growth of no less than 511% compared to 2019. This product category previously led a fairly unremarkable existence in the Pricewatch.

It is generally assumed that even after this corona crisis, people will continue to work from home - even if it is "only" for one or two days a week - so the sales volumes of work from home products remain sustainably higher. It is advisable to take this into account in the longer term marketing and advertising policy. For example, by shifting budgets for product groups. 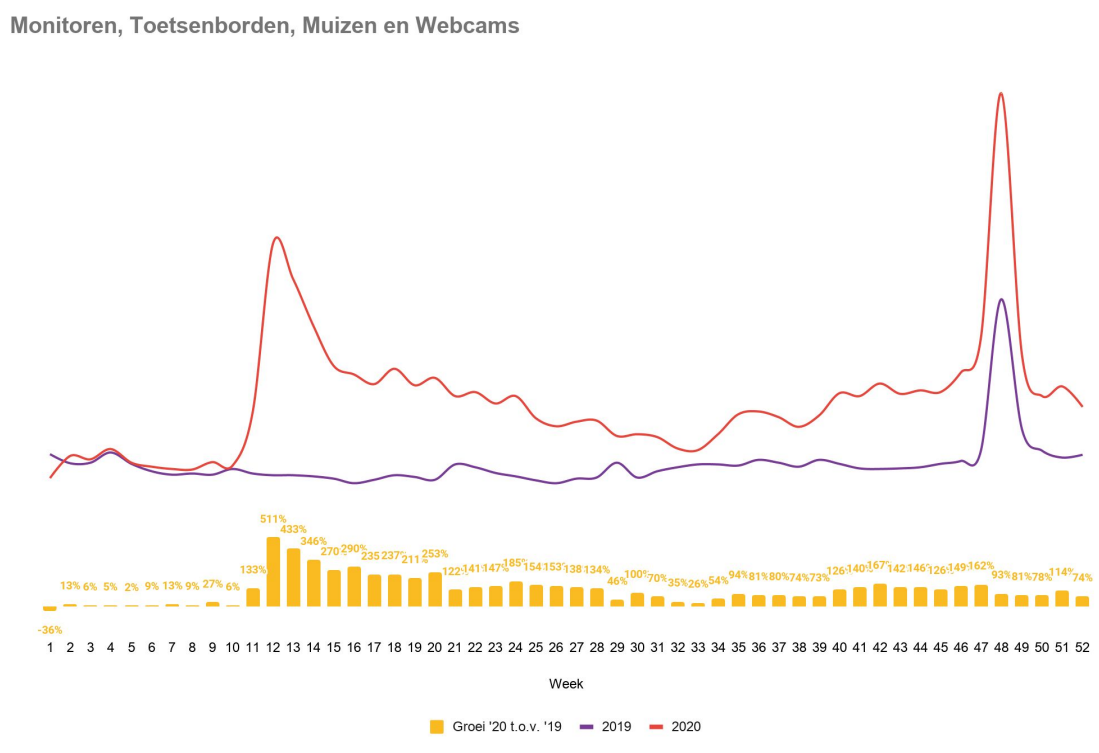 In line with the run on home workplace products, Pricewatch data around the first lockdown of 2020 show a spike in interest in routers and other network devices. This indicates that many employees who suddenly had to work from home were confronted with a Wi-Fi network that is fine for "normal use", but falters when it’s been used more heavily.

The same applies as with the previous point: these product groups will also receive permanent attention, so it certainly does not hurt to pay extra marketing attention to them. And that advice also applies to the following two points. 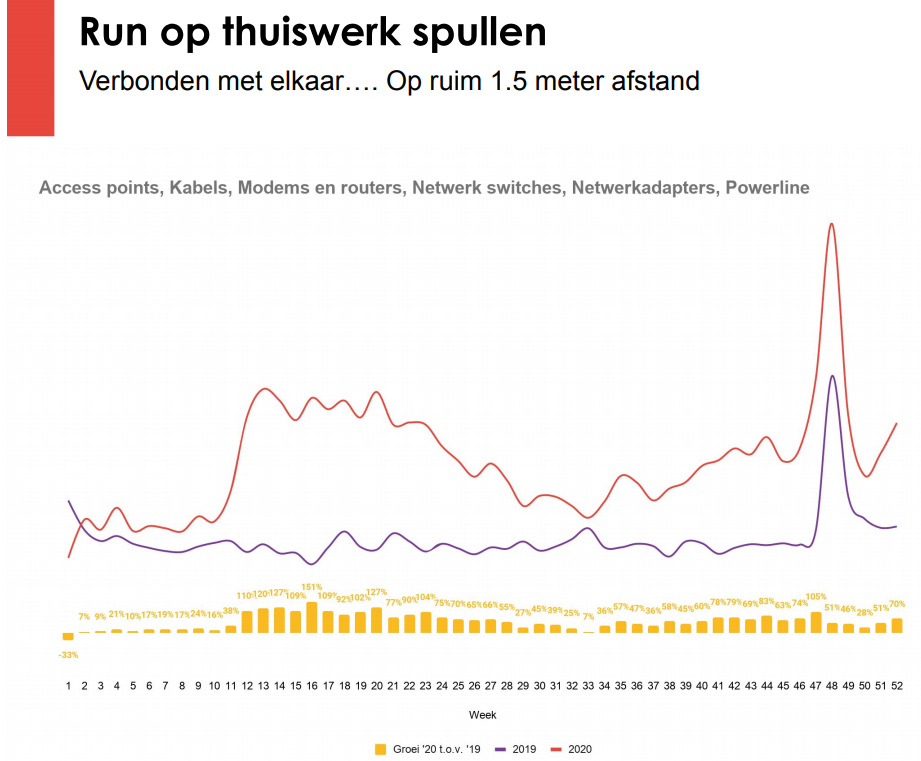 Another product category that has attracted more interest since the first corona measures in early 2020 are (gaming) headsets and headphones. In a home work situation, roommates can be a concentration-distorting factor. In addition, headsets are sometimes complementary to webcams, and an important tool for online communication with colleagues or remote customers.

The data from the Tweakers Pricewatch show the popularity of this product group has increased considerably since March, compared to the same period in 2019. This increased interest continued throughout the calendar year, with the usual peak around Black Friday and the run up to the holidays. 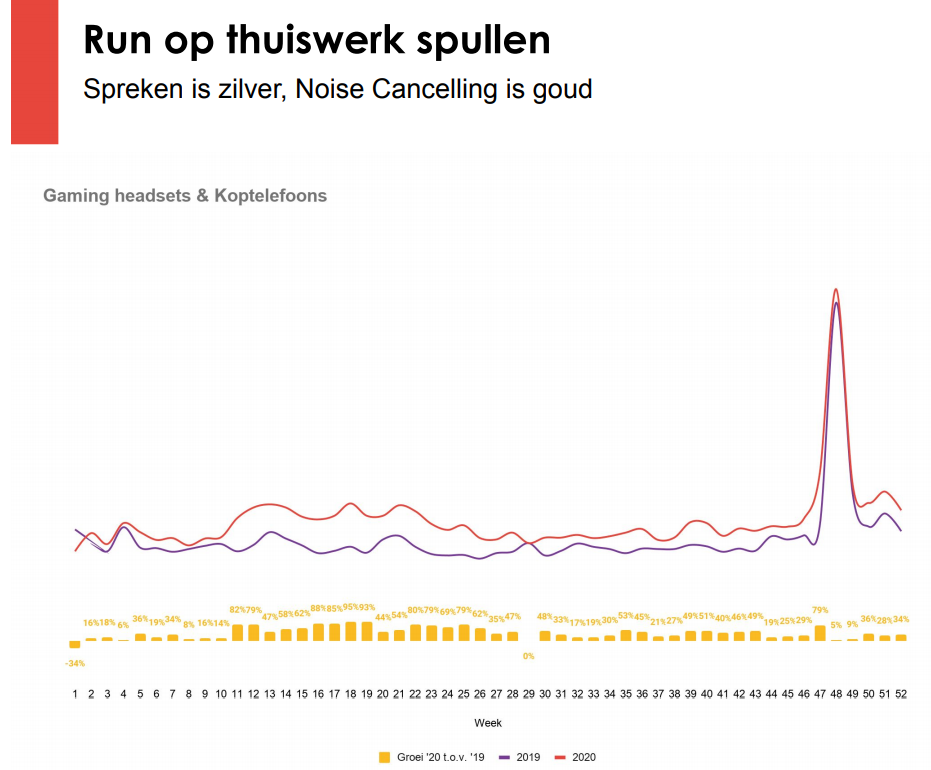 A remarkable outlier in the Pricewatch data is visible in the product categories printers, cartridges and scanners. Exactly until the first lockdown on March 12, the number of clickouts for these products was more or less the same as in the same period in 2019, and immediately afterwards it showed substantial growth that continued throughout the calendar year. Apparently, in many work-from-home situations, the ability to print "free" at the office - business or private - was desperately missed: in some periods the number of clickouts for these products rose towards doubling. 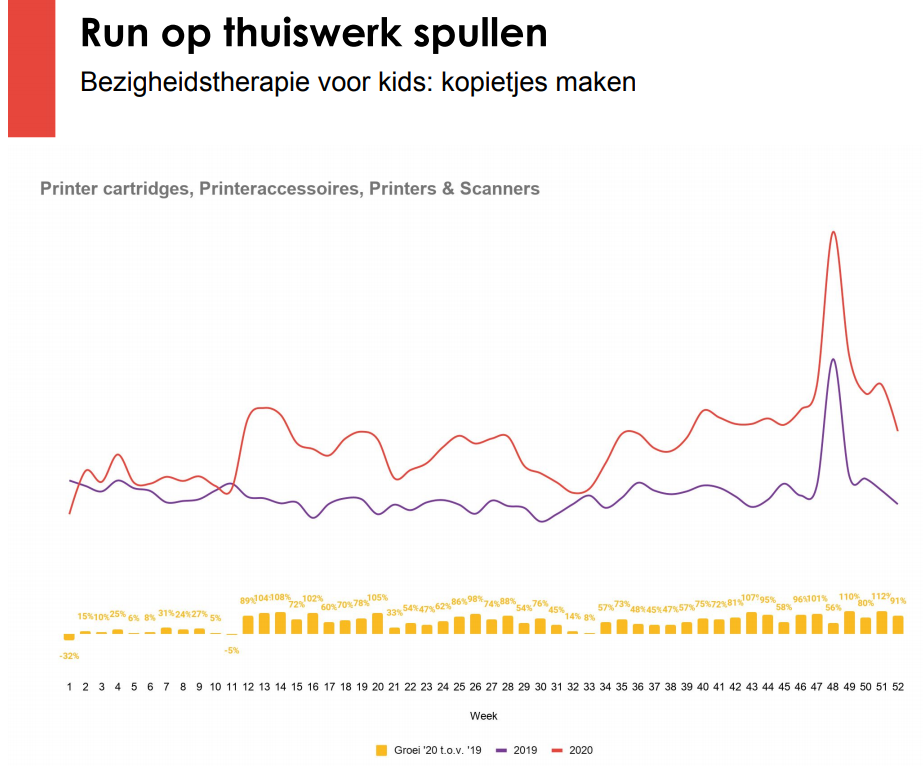 The fact that many people were more confined to their homes in the past year can also be seen in the data from the popularity of other, less "business-like" product groups. For example, after the first month of the year, the number of clicks on coffee machines, kitchen machines and blenders increased. Apparently the coffee machine in the office was missed by many people and many 'home sitters' have devoted themselves to (bread) baking and cooking due to a lack of outdoor entertainment.

For advertisers, this offers opportunities especially in the short term: unlike home-based products, it is unlikely that kitchen appliances and, for example, espresso machines will continue to show higher sales volumes. These are product groups for ehich the "momentum" can now be captured. Companies offering a variety of product groups may be able to avoid the competition for attention for home office products by temporarily - and surprisingly - targeting a completely different category, such as blenders or bread makers. 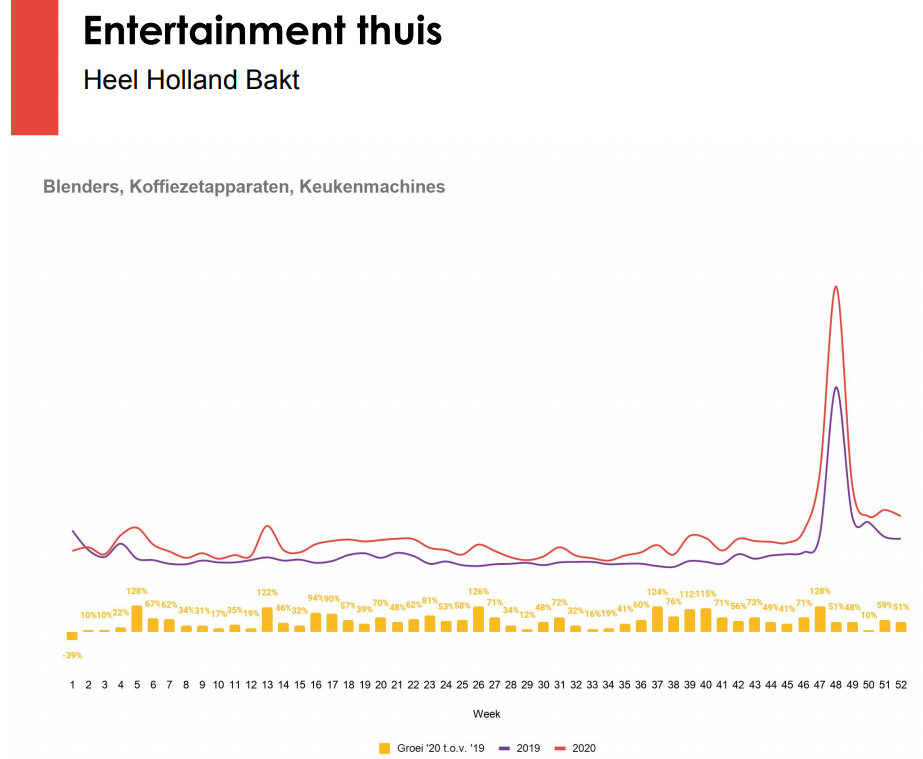 The latter also applies to a product group of a completely different order: tools. In 2020, being forced to work from home also meant that more people started doing odd jobs. This trend is also clearly visible in the Pricewatch data, due to significantly more clickouts in product categories related to power tools. Especially in the course of the first lockdown - around May - these figures show a huge peak. In the summer months after the first lockdown was lifted, the number of clickouts on tools fell back to the "normal" level of 2019, only to grow again shortly after, during the second lockdown.

This trend suggests that this concerns increased purchasing intentions that are merely prompted by temporary corona measures and that will not last in the longer term - after the end of this crisis. That does not alter the fact that it is smart to highlight products from this category through short-term campaigns. 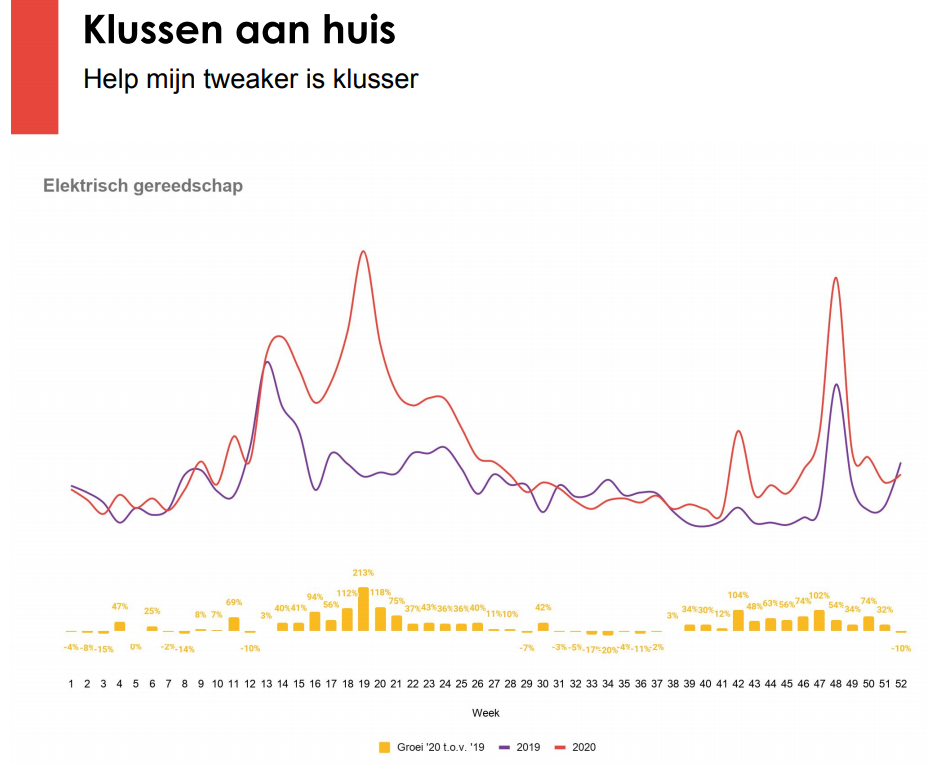 Finally, there are also product groups for which the corona crisis is actually causing the numbers of registered clickouts to fall. Due to the limited holiday options, the lack of physical events and the fact that people mainly had to enjoy themselves in and around the house, the purchase intention of cameras clearly lagged behind the figures of 2019. And that did not only apply to cameras: the same went for e-readers, navigation systems and power banks: gadgets that are pre-eminently bought for use on the road. The number of clickouts for these product groups in the data showed an opposite trend to that for home-based products such as webcams or monitors: in the first month of 2020, mobile gadgets performed better than in 2019, but immediately after the outbreak of the corona pandemic interest clearly decreased.

Where product categories related to working from home and home entertainment - or home maintenance - lend themselves more than ever to extra campaign efforts, the exact opposite applies here. Those who have the opportunity to do so would do well to temporarily focus less marketing on cameras and mobile gadgets, for example, and to deploy manpower and resources mainly on the aforementioned categories. Once the corona crisis is over, people will go on vacation again and interest will return. It is worth thinking now about a good marketing plan that can be rolled out immediately when the time comes. This gives you an immediate advantage over the competition in due course. 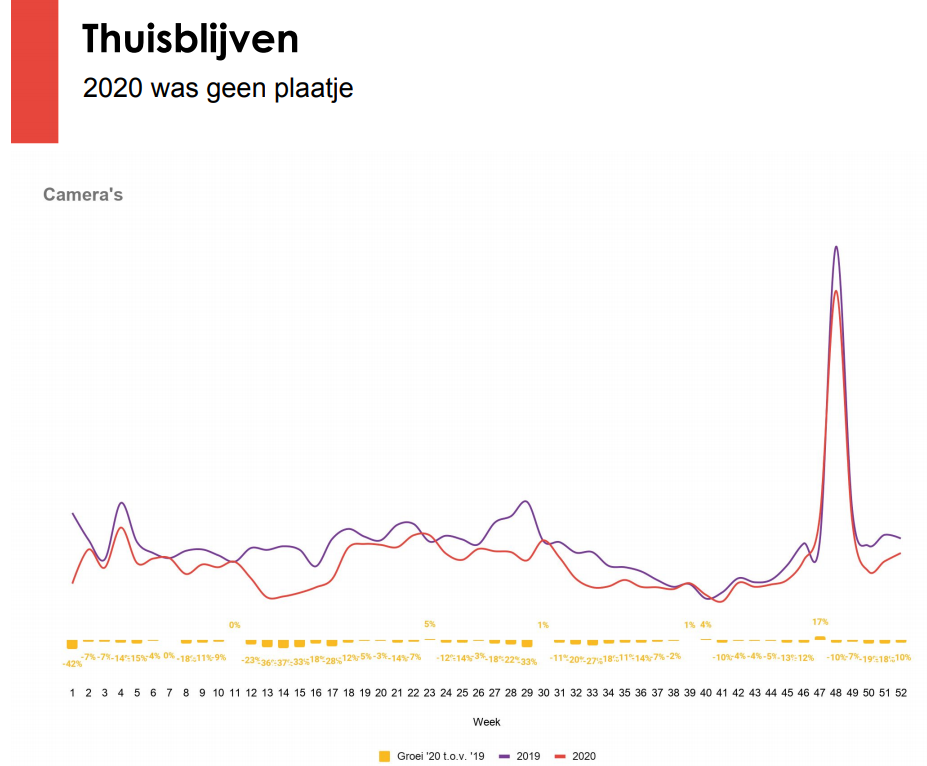