How do you position yourself as an authority on televisions? By highlighting your ignorance in another area. At least that’s what they thought at DPG Technology when the Tweakers summer sports campaign was under discussion. A bit of reverse psychology, self-mockery, and a sleek new campaign format led to an effective campaign aimed at both the tech enthusiast and the mainstream customer. DPG Technology brand manager Jitske Riemersma takes the lead in the campaign and explains how they came up with the idea and what the results of the Dutch and Belgian national team have to do with it.

‘At every European Championship there are 17 million football experts,’ begins Riemersma. ‘But what we actually need is a TV expert. Looking for the perfect TV to watch the tournament? Then go with us. It’s a strong but simple message that firmly establishes our expertise.’ And it’s an approach you can apply to just about any sport. At DPG Technology, the campaigns focused on the Tour de France (We may know nothing about nose length, but we know everything about viewing distance) and Wimbledon (We may know nothing about backhands, but we know everything about backlights) are already on the starting blocks.

That message was cast in a completely new campaign format. It became an isometric design in Tweakers’ recognisable colours, in which a television is central. ‘The inspiration for this format came from the 8-bit design we used for Black Friday last year. The advantage of this format is that you can create little worlds and we just further developed that aspect,’ says Riemersma. ‘With this design it is immediately clear. We’re behind the TV and focus on the technology, while you focus on the match. It is a format that appeals to both the tech enthusiast and the more mainstream target group. That core target group of tech enthusiasts is most important to us, but you can also reach other tech-interested people with this product and theme.’ Another requirement was that the campaign format had to be applicable to different scenarios. By just changing what’s on the TV, you can easily switch to other events. This keeps the campaign recognisable.

All media campaigns link to the landing page of the summer sports campaign. There, visitors will find buying tips, explanations, and an overview of the best deals in the Tweakers Pricewatch. ‘After a radio spot, we use a five-second tag-on that repeats the URL of the landing page,’ says Riemersma. ‘We really want everyone to go to that landing page because it’s important to offer visitors something before they start the buying journey. Reliability is one of our core values and this is certainly true of Tweakers: trust can take years to build, but only a second to shatter. That’s why, as a collection of valuable content, the landing page is vital.’ As a central hub, the landing page is also an excellent way to measure the effectiveness of the campaign.

Catching up on current affairs

The European Championship is now underway and the Tour de France and Wimbledon will soon follow. The Summer Sports campaign also focuses on these tournaments with special adverts, explains Riemersma: ‘As long as the Dutch and Belgian national teams are in the European Championship (which is unfortunately no longer the case for the Netherlands), we will capitalize on that with European Championship adverts. If they’re out, then you’ll see Tour de France and Wimbledon adverts. If things go well and Belgium make it to the finals, then we can capitalize on that again.’ Because of the strong message and campaign format of the summer sports campaign, it’s easy-peasy. Riemersma: ‘The isometric works well and can be adapted in a recognisable way to other relevant buying moments, such as Black Friday and Christmas.’

Tips for a successful campaign 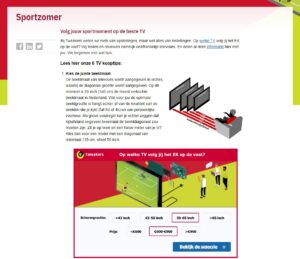