Do consumers want a smart TV? An expensive or a large television? Or both? In this article, you’ll get a taste of our TV user survey findings, which will soon be released as a comprehensive whitepaper. We investigated, among other things, which features or functionalities could convince potential buyers to take the plunge. Perhaps a superfluous spoiler: both the Dutch and the Flemish place the greatest importance on the price.

It seems that the days of no-nonsense TV are numbered. Apps are the future. The research shows that the majority of Flemish and Dutch people have a smart TV. Of the Dutch people surveyed, 68% have a smart TV, compared to 61% of the Flemish. It is mainly young people who opt for a smart TV; education level and income do not seem to play a role. 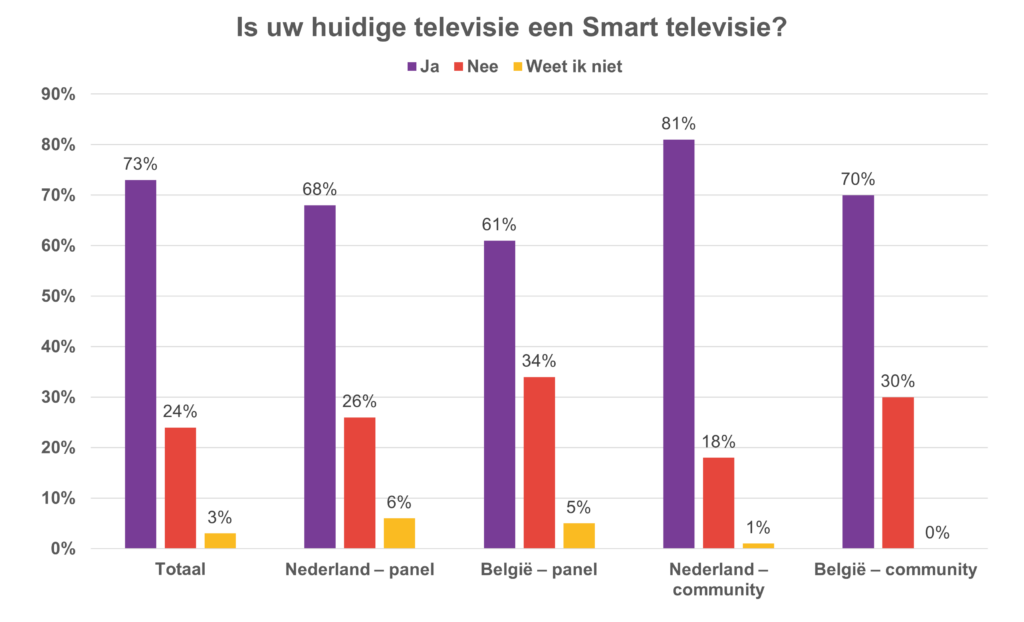 It will come as no surprise that more people in the Tweakers community. own smart TVs (81% in the Netherlands, 70% in Belgium). Smart functionalities are pre-eminently a feature that tech-savvy early adopters find interesting, such as our community members. In short, the smart TV is becoming well established and seems to be becoming the new standard. The tech target group leads the way, and the rest of the market follows.

The most important functionalities

And as to price?

Since price is the most important factor in a consumer’s buying decision, we wondered what consumers were willing to pay for a TV. Remarkably, the average Flemish consumer, at an average of €888, is willing to spend considerably less on a television than the average Dutch consumer (€1,052). Members of the Tweakers community, on the other hand, are willing to pay much more. They averaged €1,437 (Netherlands) and €1,477 (Belgium). Virtually no difference then between Dutch and Flemish Tweakers.

Age and income do play a role in these market figures. The higher the age or income, the higher the amount the consumer is willing to spend. Advertisers would therefore be wise to target more expensive and luxury TVs at a slightly older audience with a higher income. This segment is also of interest to the tech target group. A campaign aimed at tweakers.

Want more insight into the sale of TVs and smart TVs? We will soon be publishing a white paper that delves deeper into the figures, so be sure to keep an eye on our website and newsletter!